Rule #1: Break The Rules of Writing

Previous Next
Rule #1: Break The Rules of Writing

Know the rule you are breaking.

Rule #1 is a shot across the bow of those who would say you can’t do that: of course you can as long as you are willfully breaking a rule for a good reason in a just cause. In the case of writing well versus writing good, the good is much better than going to the well because a writer should always find a natural way of saying the heretofore unsaid. 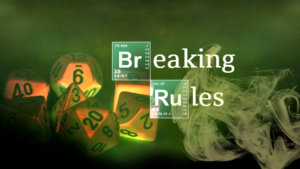 You can’t break the rules if you don’t know what they are—and why.

We start with cautionary tales because the greatest writers in the world know when you break a rule in the opening line of a novel, you just might be shouting to the heavens. So we blast off with writers breaking the rules, starting with one of the great first lines of all time. The rule to be broken (#4) states: Avoid it is and there is—and their variations—at the start of a sentence. (Please note: bold text is added for emphasis throughout.)

A Tale of Two Cities, a novel by Charles Dickens:

Enough already—we get it. Great writers like Charles Dickens, Jane Austen, and Ernest Hemingway can do whatever they want and make us like it. Also keep this in mind: Charles Dickens knows the power of Rule #3: Repeat words for emphasis, not from laziness.

Pride and Prejudice, a novel by Jane Austen:

It is a truth universally acknowledged that a single man in possession of a good fortune must be in want of a wife.

Another immortal first line. And there is always Ernest Hemingway to consider.

A Farewell To Arms by Ernest Hemingway:

There were many words that you could not stand to hear and finally only the names of places had dignity.

In this case, the distance of “there were” deepens the emotion Hemingway delivers with the “many words you could not stand to hear” as Hem pares away prose the way he might gut a fish speared off the coast of Cuba. (Bonus points: even Hem could have done without “that” in this sentence—yup, that’s a fact. (See Rule #6: Eliminate the word that unless you absolutely need it.)

For mere mortals—journalists, politicians, philosophers, pundits, poets, and the like—the fundamental rules apply. But if you can write for the ages, feel free to dismember every rule in this book with the impunity reserved for thunderous storytelling gods on Olympus.