Warming Up To A Novel Called CLIMATA

Previous Next
Warming Up To A Novel Called CLIMATA

If you are a novelist, or a writer of any kind of fiction, ideas can arrive without making a sound—if you only have ears (or hearing aids) to hear.

Take my new Young Adult novel, Climata, the story of six teenagers from all over the world who try to save the planet from climactic destruction with magic and the help of a modern Merlin. I just finished the YA novel and I am happy as can be about it, but the band of six teenagers from around the world came together in ways I am still trying to grok.

(Go here for the opening chapter on my website.) 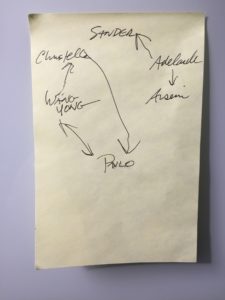 For over two years I have had the idea of building a non-profit enterprise called CLIMATASROPHE—a word I made up with a dot-com domain to go with it. The idea is to launch an independent news service—my fifth—covering global warming on the ground, where it does the most immediate damage. CLIMATASTROPHE is meant to be post-political, replacing the debate with some doofus who disputes the science. (I hear you, Greta Thunberg.) Through reporting, stories, podcasts, books, and documentaries, if the creek don’t rise CLIMATASTROPHE will provide accurate, unbiased, factual reporting about the life-changing effects of climate change. Wish us luck.

So there’s that—but what does that have to do with somebody writing a novel inspired by the simple “climate catastrophe” idea?

The Sweet Smell Of Preparation

Permit me a few words of explication. A book by the director Alex McKendrick, the director of the movie Sweet Smell of Success—and the founder of the film program at the California Institute of the Arts—has had a profound impact on the way I try to make a story clang. Among many gems, McKendrick explains how it’s best for a writer to actually write the source material before beginning the screenplay. As per example he cites the long story (not for publication) the English novelist Graham Greene wrote about The Third Man—the classic movie starring Orson Welles and Joseph Cotton—before Green wrote the screenplay for a terrific movie.

Well, that was good enough for me, for a couple of reasons. The first is writing the story as a standalone short story or novel would give me negotiable tender, i.e. intellectual property (IP) that someone could buy or publish or both. Worst case, I would not be stuck with a story that die without a peep.

Second is Graham Greene himself, one of the great novelists of his time, who also wrote thrillers he called “entertainments.” I have read Greene all my life and still have two of his novels sitting on my bedstand waiting to be cracked. The crushing weight of Catholicism in Greene’s stories speaks to me even more as a lapsed Catholic.

I part ways with Green only when it came to publication: his text for The Third Man never saw the light of day, but I could not bear writing anything without hearing the distant chimes of ultimate consumption.

What’s In A Word?

So there I was in September 2019 with the idea of creating boffo I.P. that would shout out for a television show.

The YA novel, like CLIMATASTROPHE, was born of a word that did not exist: in this case climata  (pronounced CLEYE-mata). All I had was a word tolling back and forth in my head—but that was enough to get started: as former Catholic the very sound of climata inevitably led me to stigmata, the marks made by the nails through the palms of Christ when He was crucified on the Cross.

All of the above produced an image that stuck in my head: a young teenage girl walking on water after the sign for climata, a bleeding circle-in-the-square, appears on both her palms.

And that was it—that was all I had. I still no idea who this girl was or where she lived. I somehow decided she should be in Madagascar, off the coast of Africa, and when I looked up common names in Madagascar I miraculously found the very Christ-like name of Christelle—yikes!—perhaps a female Christ was ready to take a walk.

At this point I had three additional ideas in the mix: (1) the impulse to write about the battle between magic and technology; (2) the flickering desire to try a Young Adult novel, something I had never done before; and (3) the notion I could get a nice chunk of original IP on the record—content ready to be further exploited in television and/or film.

This was really the first time I had ever written a novel with any concerns about the commercial prospects, but in the last five years I have been pounding on the door of television with some small luck, and I wanted Climata to have a depth and originality that would translate well to first and/or second screens. I really want people to read and hear and see all the issues raised in Climata—including the idea it’s too late to do anything about climate change.

In practice that meant my teenage heroes had to come together from around the world, not only Christelle in Madagascar, but Sander in California, Adelaide in Australia, Arseni in Siberia, Paulo in Peru, and Wang Yong in  China. (Pablo is from Peru, not Brazil, because I wanted a Spanish-language character rather than one who spoke Portuguese.) I would also steal from the master spy novelist Daniel Silva and write in short, digestible chapters headlined wherever the action is happening, like “Cape Tribulation” or “Mavericks Beach” thereby situating the action all over the world. Google Earth became an incredibly powerful tool in this pursuit. You could literally type in the street address of a bed-and-breakfast in Bethel, Alaska, and see the street and the entire neighborhood with landmarks included.

From the beginning I was trying to create a global television property for a streaming service like Netflix, Amazon, Disney, Peacock, Hulu, AMC, FX, or another entity to be named later.

I also wanted to experiment with how I would write such a thing. Instead of having no idea where my story was going, I decided to outline the whole magilla before I wrote a word. This, too, was new for me, inspired by James Patterson’s MasterClass online. In the process the outline morphed into a Bible, the TV industry term for a television show’s master plan. In practice, I was building out the Bible before and after I wrote the actual chapters so that the Bible informed the chapters and chapters informed the Bible. I know that sounds clunky but it worked. By the time I finished Climata, in less than six months, I had nearly 50 pages of my Bible ready to form the basis of a television show with enough content for at least two seasons, maybe more.

As for the Young Adult novel itself, Climata clocked in at 56,500 words, nicely above the 55,000 threshold necessary for a YA novel, and is now in the hands of prospective agents with a few nibbles already forthcoming. My next task is to turn it into a TV series after a short palate-cleansing break for some short stories kicking around upside my head. I am going to use the Bible as my guide and the Climata novel proper as needed.

The TV-Bible-as-you go experiment solved one enormous problem for me: the extreme difficulty I experience actually writing a Bible from scratch. Think of it this way: you’re at your desk and you have come up with an entire season of television. Very very difficult and nearly impossible for me heretofore. But now I’m starting with a Bible and a full-blown YA novel as my original IP preceding the task of writing the television pilot and scripts. I feel all kinds of hope about the TV scripts to come because so much of the work has been done.

So we’ll see how that goes. Thank you for indulging me as I have tried to deconstruct how your humble correspondent is still trying to learn how to write a better story. As someone once sang: it will be just like starting over.