CON GAMES: Where Have You Gone, Rick Pitino?

Previous Next
CON GAMES: Where Have You Gone, Rick Pitino?

Sports were in the air everywhere when I was a kid.

My family lived on Stratton Road in New Rochelle, New York, for five years in the 1960s, next door to Claude Harmon, the golf pro at Winged Foot and the last club pro to win a Major championship—at the Masters in 1948. All five of Mr. Harmon’s sons would become golf pros, and Claude Harmon Jr., better known as Butch, would go on to coach Tiger Woods and many other great players. 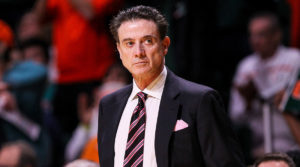 But that ain’t the half of it. When the Harmons left for Palm Springs in the fall, they would rent their house to Frank Gifford, the Most Valuable Player for the New York Giants of the National Football League (NFL) in 1956, the year the Jints won the NFL championship. The Giffer was about to return to the NFL after being knocked cold, into retirement, by Chuck Bednarik.

During his premature retirement, The Giffer— beginning his broadcasting career at the local CBS station—would drive my Dad into New York City as he read the newspapers out loud because my Dad did not know how to drive. My mother and Maxine Gifford, The Giffer’s beautiful first wife, became lifelong friends, and we were friendly with their kids—Jeff, Kyle, and Vicky. While the Giffords lived in New Rochelle he made All-Pro as a flanker (wideout) in his comeback, just as he had made All-Pro as a halfback and defensive back in his prime.

The Heroes Next Door In New Rochelle

I don’t think another family in America had a Master’s champion and an NFL MVP living next door, but we did. That just seemed normal at the time—like having the saloon-keeper Toots Shor as our honorary uncle. Iona Grammar School, at the top of the hill on Stratton Road, the street where we lived, was also in the mix. Run by the take-no-prisoners Irish Christian Brothers, Iona was the place where I learned sports belonged on the altar in a house of worship, not just on the pedestal where we put Mr. Harmon and The Giffer.

At the exact same moment in time, the fictional Rob Petrie lived with his wife and son in New Rochelle on The Dick Van Dyke Show, just as years later the character played by the actor Christopher Walken in Catch Me If You Can, lived in New Rochelle while he tried to avoid paying his taxes.

New Rochelle, in the suburbs of New York City, was a place where something about America hit home—including our need for heroes in sports. I had no idea where Joe DiMaggio had gone—but I knew DiMag had lived in the Elysee Hotel in New York in the 1940s, along with my father and the actress Tallulah Bankhead.

My three brothers and I walked up that hill to school every day and back down after practice was over.  For me the experience was poignant and indelible and now takes the form of this short story, called WAR BETWEEN THE STATES,  I wrote about being on the football team the day John F. Kennedy, our Irish-Catholic President, was shot.

Two announcements have put New Rochelle back in the news: the appointment of Rick Pitino as head basketball coach at Iona after a year of exile in Greece; and the designation of one square mile of the city as a quarantine zone because of the coronavirus.

I was excited when they announced Pitino, though scandal at Louisville cost him his second NCAA championship after winning the first at Kentucky. But I have come to like him less over the years: with great enthusiasm for the team he took to the Final Four at Providence College; his brief stay that turned the New York Knicks into a pressing playoff team; his revival of Kentucky basketball, culminating in his first NCAA championship; his disastrous stint as head coach and president of the hopeless Boston Celtics in the NBA; and then the roller coaster at Louisville before his banishment to Greece.

I read two of his books, but after the Knicks, I loved him less and less at each stop. At Iona I am prepared to love him again if he can seem even slightly less unhappy when he coaches—and, of course, if he wins.

His arrival, coinciding with the coronavirus, is certainly a coincidence rather than a divine judgment against New Rochelle. Or is it? Are the two events, the coach and the virus, related in some cosmic way?

I don’t think so and I hope not. To believe that you would have to believe a vengeful God with a long memory and a grudge against Rick Pitino. Better to just survive and advance.