CON GAMES: I’m Proud To Be An American From New York

Previous Next
CON GAMES: I’m Proud To Be An American From New York

I awoke this morning feeling like I’ve never felt before about being an American—and a New Yorker, in that order—and I wanted to share why I feel so proud. 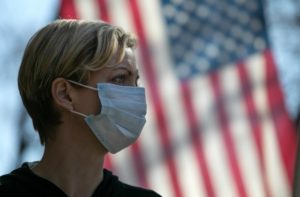 Oh say can you see….

As a writer my father covered World War II, the Korean War, and Vietnam with a special love for military tactics and—most important of all—for the American soldier. He loved American doughboys on the front lines with a passion transcending religion. After World War II, when the National Anthem played at ballparks, he bled for soldiers who kept the flag flying for all of us. My father, a war correspondent who earned two Purple Hearts, had seen first-hand the price paid for love of country, for sacrificing for the greater good—and he never forgot what it meant or how much it mattered.

We are having that kind of moment in the United States of America because of the doctors and nurses and healthcare workers and support staff who have been living in the belly of the beast for at least the last month—especially the medical volunteers who have come out of retirement with everything to lose. There will be no endorsements when the game is up, no celebrity, no parades when we are allowed to have parades again. There will be the pat on the back here and there—we might find the grim equivalent of “thank you for your service”—but the unspoken horrors of death will haunt the pandemic healthcare workers. If they are lucky (and they are not) their sacrifice might be remarked upon in an obituary in the local newspaper (if there are any papers left). At minimum they will endlessly re-live the most horrible moments of horrible deaths—if they survive the virus themselves. And they have the added burden of going home every night knowing their sacrifice could include every member of their own family should they bring the infection home.

This killer is particularly cruel because it turns the living into angels of death even as it requires the dead to die alone. Thus do the healthcare workers become confessors, confidantes, rabbis, priests, shamans—and witnesses for all humanity before the parade passes by. Like soldiers cradling a comrade, they will carry loss with them in loco parentis and in lieu of friends for the rest of their lives.

Facebook and social media of similar ilk mean we have been able to see the faces beneath the masks all over the country (and all over the world). Alive in the face of death, they are anguished people of every sex and age and color and persuasion—at a time when none of that means a thing, not in the face of the most obvious truth, that all people really are created equal.

For once there are no bombs, no bullets, no terrorist attacks, no rhetoric worth the paper it’s printed on. Instead we have an airborne life-threatening disease that could very well kill us all—if not for the tens of thousands of Americans sacrificing everything because they could not stand by while other Americans were dying. These Americans are no different than the grunts at the Battle of the Bulge—or the New York firefighters who rushed into the World Trade Center on 9/11, on the first day of the 21st Century, without knowing if they would ever see a loved one again. They are like all heroic Americans who sprint toward cataclysm rather than running away because that kind of strength is in our DNA. Maybe it’s a death wish we could do without in the run-up to needless wars, but it’s also the tie that binds the faces behind the masks to all of us—because most of us would rush in, too, if we could.

When it really counts we Americans are willing to give up everything for each other because they would do the same for us. Such is our greatness. To see this unfold with the greatest intensity in New York makes me proud to be a New Yorker—born, bred, and buttered. As with 9/11 so it is with this disease: the beast has sought out New York, and New York has not been found wanting. New York has the best of everything but is always ready for the worst.

I hope all the medical workers know they did something for the greater good, something so great and so good it can never be repaid. I don’t want to call them heroes because they are ordinary people who have always walked among us, immortals now guaranteed a luxury suit in the afterlife after tickets are punched.

We will sing of them for love of country and the song will never die.