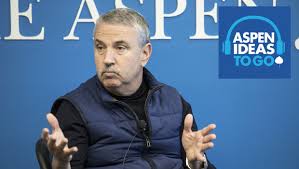 Thomas Friedman, the Pulitzer Prize-winning columnist of The New York Times, was officially christened as king of the world over the weekend in Aspen — and why the hell not?

He wore the mantle lightly at the Aspen Ideas Festival, in part because he married into the gazillionaire Buxbaum family, who have so far given tens of millions of dollars to the town, with the latest dollop a $25 million downpayment for a spanky campus at the Aspen Music Festival and School. But Friedman’s wallop at the podium has all but nothing to do with Bucksbaum bucks, and everything to do with his prescient ability to package the zeitgeist with the tidiness of a juice box — the kind that comes with its own self-piercing straw.

Before the world knew The World is Flat, Friedman was floating the idea here under the Benedict Music Tent, telling those who read his every word that his insta-book tome on f-l-a-t-n-e-s-s, required nothing more than the 90-day leave his editor at the paper so readily approved. Imagine typing a best-seller in ninety days, a better clip than anyone not named Joyce Carol Oates! For Thomas Friedman at the top of his game, three months is more than enough for sufficient bestselling aforethought.
Wags who worry about his tortured suck-on-this support of the police action in Iraq best kept their distance once Aspen’s favorite Flatliner started rolling in his speech Friday at the Ideas Fest. As he becomes more revered, treasured, cherished, sucked up to, Friedman thinks bigger, wider, deeper, weightier thoughts, with no trend and no trip beyond his Delphic purview — and no one of equal status to question the wisdom of his ways and means. After proving somewhat inconclusively that the world is flat, Friedman has now opened wide enough to decide said globe is Hot, Flat, And Crowded, the title of his latest bestseller-to-come, the one he was kind enough to share with us under the tent in Aspen.

Let us now praise famous Friedman: as a gumshoe reporter in the Middle East and elsewhere, he makes the world his beat better than anyone on the planet, and his instincts to seek out the obscure expert at remote think tanks and corporations are beyond compare. He is wicked smart, more than smart enough to seek and find even smarter people like a heat-seeking missile. He writes with remarkable clarity — no other journalist writes mo’ better on a daily basis — and his ability to render the problems of the world in a thousand words or less borders on the miraculous.

But something has happened to Thomas Friedman on his way to becoming best in show: he has started to believe his own bullshit.

How can you tell? A fatal flaw has crept into Friedman’s reporting that borders on journalistic megalomania. In his new book, as served up from the podium at the Ideas Fest, virtually every firsthand source cited has morphed into his “friend.”

As journalists go, Friedman is now the undisputed world heavyweight champeen when it comes to name-dropping his “friends.” He knows anybody who is anybody, and everybody who is anybody is his “friend.” You come away from his work wondering if he ever interviews anyone who is not his friend, anyone whom he despises. And you can’t help but compare him to the late great David Halberstam, another bestselling journalist: though prone to pontification, Halberstam would never refer to “my friend” in any serious work.

David Halberstam defined his work as reporting: he was literally reporting a story to the day he died. Thomas Friedman now defines himself as a wise man who tells everyone else what to think: the difference between questions and answers.

Halberstam was a clunky writer at first and always leaned on his reporting to get by. Friedman has no such limitations on his prose, and his ability to churn out one memorable turn of phrase (like “global weirding”) after another (“energy Internet”) is suffocating. Friedman has no suppression of effect, no willingness to let a graf go by without his primordial penchant for phrase-making. The glib sentences pile up like pollution in Bejing, to the point where not even the highest spires of the skyscrapers can be seen with a telescope. This can work gloriously well in a column, but at book length the practice should be banned as cruel and unusual punishment — prose that should be prosecuted — like sucking on an exhaust pipe in the undeveloped world.

There is the hard cold truth that Thomas Friedman, no longer a mere reporter, can now leap over tall conundrums in a single bounding phrase. So adored, so loved, so consumed by his audience, it’s no wonder he has come to conclude that no one is more wonderful than the man he sees in the mirror every morning. Scholar, poet, intellectual, theologian, columnist, rock star, celebrity, preacher man — Thomas Friedman is now all things to all people who like to think they are thinking about the world.

Another late great journalist, Bob Considine, might have been considered a kind of Thomas Friedman of his era, a book-writing star of television, radio, and column. Unlike Friedman, Considine once wrote a “Newspaperman’s Prayer” that decried the self-defeating narcissism of thumb-sucking “think pieces.”

Though too soon to pass judgment on his new book, Friedman’s big idea this time around is (a) a floor on gasoline prices; and/or (b) a tax on gasoline. Given all the wrapping paper around this gift of profundity, there’s not much there there.

Finally, despite all his documented globe-trotting, Friedman comes back home convinced of the notion “green is the new red, white, and blue” — one more cloying, annoying phrase spooned up on the Fourth of July — and the unshakeable if jingoistic conviction that America has to lead the way or it’s curtains in a flat world that’s going to eat us for lunch. By this time in the speech under the tent in Aspen, the reporter of yore was long gone and we were asked to take this pronouncement on faith.

After all, this was Thomas Friedman talking.

One last word about his “friend” Auden Schendler, who works at Aspen Skiing Company. Friedman closes the final chapter of his forthcoming “Flat” sequel at the Rocky Mountain Institute’s (RMI) 25th anniversary celebration in Basalt, Colorado, by noticing that Schendler changed the quote on his business card to one from Charles Bukowski about walking through “the fire.” But there was no mention of the shift in Schendler’s title on the card from something green to “Corporate Responsibility,” nor does Friedman mention the RMI event took place at the “Peace Barn” in Basalt, two obvious reportorial nuggets with obvious implications given the oil wars of the Middle East.

A lapse of reportorial concentration? Maybe. Perhaps when the ideas get bigger it’s easier to miss the telling detail delivered from someone other than one of your friends. Maybe it’s the ideas of Thomas Friedman themselves that are actually hot, flat, and crowded. For a working journalist, could anything be worse?