CON GAMES: 40 Years In The Desert

Previous Next
CON GAMES: 40 Years In The Desert

I pride myself on never coming within a whisper of writer’s block but today I have no idea what to say—because today is my 40th anniversary of writing fiction. The point is I kept at it, and now here’s this new site, Michael Conniff’s Community, to give me a place to put all my things new and old without anyone to get in the way but me.

Looking back at all those stories and scripts and words, I do know it was easier to write than not to write, and I think that’s when you really know you’re a writer. It also helps when you have a father, Frank Conniff Senior, who was a terrific war correspondent and columnist for years and years; and an uncle on my mother’s side, John F. Murray Junior, who wrote killer short stories for Roger Angell in The New Yorker and a novel published by Little, Brown. The first story Angell published was about the time my Uncle Jack tried to blow his head off. As you might guess he never made it to his 40th anniversary—not even close. 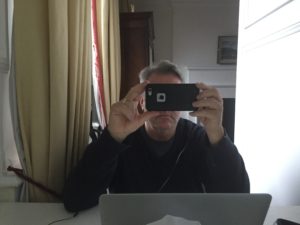 So I have writing in my blood on both sides. I come by it honestly. I just open a vein and bleed.

At times it’s been hard as hell but mostly it’s been joyful or I never would have done it for so long with no reward but the work itself. I will say this: I am so happy to have written. I think about what my life would be like today without HAPPY ENDINGS, my short stories; or GARDENWILD, my first novel; or the seven novels in the BOOK OF O’KELLS about my family. Without my babies I would know almost nothing about myself or my life, about the heart of darkness where these stories would have festered. I’m proud that I got them down and even prouder I tossed out every bit of fiction I wrote before the age of 38—the first fifteen years or so. That makes me think I might have learned the difference between good and bad along the way. Time will tell.

So what’s it like to grind away for all those years? I would say one percent inspiration and 99 percent perspiration but I would also say this: the Gods of Fiction rewarded me today on this anniversary with one of those rare days that never happen when you write like the wind and everything comes out almost right. It happened when I was about halfway through my new novel BOOK OF O’KELLS: NATURE OF THE BEAST. I wonder why today was one of those days—but of course I know why—because if you stick at it long enough, day after day after day, one of those perfect days comes around to remind you they never happen and that writing always comes out wrong. Unless you have the time to make it right.