THE SUPERNOVEL: Annotation Can Be Fun

Previous Next
THE SUPERNOVEL: Annotation Can Be Fun

The novel as a form will never die but will evolve as it always has, begging, borrowing, and stealing from the best.

The world opened up to me this week when I realized the simple tool of annotation was the window into the house of fiction that I have been looking for all these years.

Annotation is simple, and it works much like a footnote: using word processing software, you can leave the spot in the text and write asides. But they are not asides at all: they are the essence of what I am trying to do, not something peripheral, parenthetical, or optional.[i] 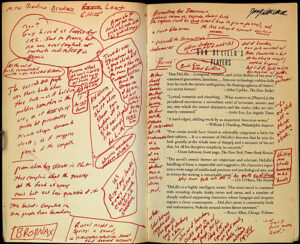 Annotation is the future of the Supernovel.

For the first time in my writing life—nearly twenty years now—the annotations have given me a chance to leave the linear limitations of the form that has always forced me to travel from Point A to Point B. Bob Reiss, one of my writing instructors at Breadloaf, said that I was like Seabisquit, the champion horse, who sees something and wants to run off in that direction.

Annotation is really the tool that lets me do that for the first time. But after a week with my new writing toy, I am already unhappy and ungrateful.

Annotation has been part of Microsoft Word, for example, for years, but it is an awkward tool. When I annotate, the software gives me two sources for the note: “Michael Conniff” and “All Reviewers.” Annotation is really designed for lawyers to imbed their comments in a document without carving up the text in a slaughter of editing. That’s not what I need. I need a tool that will enable me to change voice at the click of a mouse,[ii] an idea that has nothing to do with reviewing a legal document. I need to be able to go from a manic-depressive narrator to a factual medical tome describing the condition to a fictional legal case that led to the character Will O’Kell’s incarceration.

There’s more to the toy I want: I have to be able to mix and shift media at will.[iii] This week, writing of collages and pictures and transcripts, I realized that I could show the photographs—I may have to take/make them myself—and the transcripts need to be read aloud, as they might have been at an actual hearing. In this scenario, the starving novelist has to become photographer, narrator, actor—or enlist the collaboration of those who have these skills. (I keep reminding myself that my mother was/is a photographer, and perhaps that impulse lives somewhere deep within me. I might even use my ISWire press credentials as the way to gain the subject of sports.)

I call all of this the cybernovel because there is nothing else to call it yet, and the deed will be entirely in the doing, in the stumbling forward, in the placement of one step after another after another.

I know, too, that I owe all of this to The Internet’s World Wide Web, to the Hypertext Markup Language (HTML) that encourages the author to mix media, voice, chronology, to go from Point A to Point F to Point X-plus-a-century, to bend and beat this thing until it makes sense in the doing of my cybernovel, ATOMIC TOM. It is, in a sense, a new language, a new form—a new standardized format[iv]—that is far more demanding (and unforgiving) than anything that has come before, that requires skills beyond the reach of those, like myself, steeped in the inkwell. (A grandfather at the wire service who lost his job when Morse Code gave way to the teletype.) But perhaps (I hope) this can be my great advantage: the last of the reporters to bang away at a manual typewriter, to write with carbons and copy paper, to stick my story up a pneumatic tube and see it fresh in print the next morning. I hope that training will turn out to be my feet on the ground, my grounding in a medium that’s closer to vertigo than the force of gravity. I don’t know. But I do know I can sure as hell try.

[i] For example, annotation could be used as far more than a comment or an aside: it could provide parallel storylines, competing and disputatious opinions, clues to character or plot, or any number of uses. Annotation twenty years ago (and today) was (is) nothing more than a way to layer text onto text. But it could be so much more—no longer a “note” on primary text, but software that can give multiple story lines primacy.

[ii] Such a tool would not only work for the writer, but for the reader/viewer as well, enabling the ability to toggle back and forth from one character to another.

[iii] With the the click of a mouse, or the touch of the screen, you could shift voice, character, media, form, language, subject, time, place, or space. To provide that kind of access, you would need the kind of compartmentalization index cards and storyboards imply.

[iv] Though the Supernovel is a new form, the format of such a form is open to question, and how to manage the multiple threads of the storytelling is still completely up in the air, as are the methods to create such a thing.