EAST HAMPTON, NY—Sayonara. Out of here. Later for you, Dude.

Put a fork in it, folks: the Good Guy in film and television is nowhere to be found in most media markets global and domestic. Look in any direction—from a New York City street show on  HBO like THE DEUCE, to a mini-series on Sundance from New Zealand like TOP OF THE LAKE: CHINA GIRL,  to a sweet Swiss missive of a movie like THE DIVINE ORDER from Switzerland, seen here at the Hamptons International Film Festival—and you will find men so irredeemable their tickets have already been punched at the gates of hell. 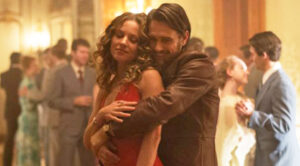 Vinny trying not to be bad to his girlfriend in THE DEUCE on HBO.

THE DEUCE from David Simon and George Pelecanos—they of HBO’s THE WIRE and TREME—have re-created the world of post-Disney 42nd Street in New York, a time when peep shows, art films, whores, junkies, and sundry perps  prevailed. The putative hero of THE DEUCE is Vinny, a barkeep played with sardonic glee by James Franco, who also plays Vinny’s bad-boy twin brother Frankie. Vinny, presumably the good guy in the piece, is also a chain-smoking, womanizing gangster-to-be who mortgages his soul to the Mob by the third episode. And he’s the “good guy.”

The Good Guy Gap is even more pronounced in TOP OF THE LAKE: CHINA GIRL, writer-director Jane Campion’s sequel to the original TOP OF THE LAKE on Sundance. Campion’s feminist world, always so dark when it comes to men, descends in CHINA GIRL into complete blackness in the city of Sydney, Australia. The China Girl in question is one of many teenage whores imported from Thailand as prostitutes and then surrogates for an illegal fertilization ring led by a character called—I kid you not—Puss. Played with astonishing centripetal force by David Dencik, Puss is the male dark night of the soul incarnate—a brutal, violent coward who couches his mad, maddening rhetoric within the hypocritical intellectual tropes of female empowerment.

Nice guys need not apply to this sequel. A nice-enough police supervisor is nonetheless having an affair with a constable played by Gwendoline Christie, famous for her towering Lady Brienne of Tart role in HBO’s GAME OF THRONES. The one exception to the male no-fly zone in CHINA GIRL is Pyke, the father of Puss’s much-too-young daughter, played by Alice Englert, Campion’s own daughter;  Pyke himself is played punctiliously by Ewen Leslie—a male character who tries so hard to do good by his daughter he becomes inexorably pathetic.

To Campion’s credit, the feminists in the story can be made to look equally officious and ridiculous—one is overplayed by Nicole Kidman—but such is not the case in the Switzerland of 1971 meticulously made real in THE DIVINE ORDER. The order in question, divine or not, requires that only men have the vote and all the power—and that disenfranchised women do their bidding without question. The women, though cowed to begin with, are universally admirable, while the men are stupid dolts so incapable of countenancing the future the women in the town go on strike. At the end of the day, after further agitation, the suffragettes in THE DIVINE ORDER convince men to give them the vote.

The Good Guy Gap is problematical on many levels. These stories, though compelling, are out of whack, with maleficent men applied as kind of fictive shorthand, the way too many movies and television shows deploy “the evil corporation” as a shorthand for a faceless baddie shorn of nuance or complexity. By characterizing all men as evil—or at least as dumb as a rock—these stories whiff on the opportunity for men and women to vie for the same high ground with the audience.

Worse still, this unrelenting roll call of bad men with no redeeming qualities is simply unrealistic. In the real world, not all men can be this bad, any more than all women can be good. Either way, the very concept of such a good-bad dichotomy is flat-out ridiculous. The stories, inevitably, suffer.

Like it or not, in movies and television, it’s lights out for the Good Guy, now nowhere to be found.